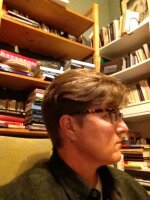 Her next project, Changing Nature and Politics (a number of essays for which are already published or in press), elaborates distinctly democratic and ecological criticisms and alternatives to modern political economy. Drawing upon the impersonal materialism of Nietzsche's most affirmative thinking, Orlie argues we need to confront the disjunctures between the scale of space and time imagined by modern political economy and those required for the cultivation of ecological resilience and political efficacy.

Orlie's longest term work in progress, Local Wisdom,  is a collection of essays on thinkers who explain and exemplify the important relationship between wise judgment and the cultivation of intellectual and affective capacities attentive to the singularity of place and time (including essays on Socrates, Machiavelli, Montesquieu and Tocqueville, Darwin, Nietzsche, Simone Weil, D.W. Winnicott, Aldo Leopold, and Wendell Berry). While each figure is well aware that the aim of thinking is to generalize, each also presses us to acknowledge how the singular features of locale effect wise judgment and advisable action. Each figure explores practical ways of incorporating such singularity into meaningful theoretical statements.