The Association of Minorities in Political Science or AMPS, aims to provide professional development, academic support and mentorship to historically underrepresented groups in the discipline. The group connects political science students with the resources to pursue research, scholarship and career opportunities.

AMPS was founded in with the intention of increasing representation in the field of political science. 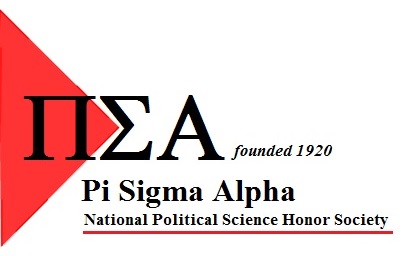 Pi Sigma Alpha was founded in 1920 at the University of Texas for the purpose of bringing together students and faculty interested in the study of government and politics. Professor C. Perry Patterson was an early leader of the first chapter and served as national president of PSA from 1920 until 1932. The success of the honor society at the University of Texas prompted other institutions to apply for chapters, with the Universities of Oklahoma and Kansas establishing chapters by 1922. In March of that year the society held its first national convention at the University of Oklahoma. Growth in the honor society was gradual throughout the 'twenties and 'thirties and accelerated after the Second World War. Today, there are over 460 chapters throughout the country. There is at least one college or university with a PSA chapter in every state and the District of Columbia and the U. S. territory of Guam.

The Pi Sigma Alpha national office encourages local chapters to "[function] as an integral part of the Political Science Department in the promotion of worthwhile extracurricular activities related to public affairs." Gamma Mu, the chapter at Illinois, was established in 1956. The Illinois chapter has engaged in a variety of activities over its history. From time to time it sponsors brown bag lunches with faculty to discuss their areas of interest and to explore graduate school options. Members also select the faculty recipient for the Pi Sigma Alpha/Clarence A. Berdahl Award for Excellence in Undergraduate Teaching.

The scholastic requirements for Gamma Mu are higher than the national minimum. To be invited to join Pi Sigma Alpha at Illinois, a student must have junior standing (60 hours completed) with at least ten hours of political science courses, a 3.00 university GPA, and a 3.25 political science GPA. Please contact the Undergraduate Studies Office of the Department of Political Science for more information on how to apply.